In cooperation with GITA and Bank of Georgia, two successful business accelerators were introduced to Georgia. Payze, Cargon, Agrolabs and Cardeal were named the four winning startups of both streams of the 500 Georgia Acceleration Program and now, these companies, with the support of the Bank of Georgia, are in Silicon Valley, San Francisco, holding extremely interesting meetings. We followed the journeys of the winning Georgian startups to Silicon Valley to share with our readers their initial impressions and experiences in the World Technology Center.

The Georgian startups visited Silicon Valley on August 3. On the first day of their visit to San Francisco, the winning startups and mentors of the 500 Startups Georgia and Singapore Acceleration Program met.
Michael Lazarenko, the founder of one of the Georgian 500 startups, Agrolabs, talked to us about his thoughts on the first day of the visit and his expectations. He said that although the first day was not very busy and they were given time to adjust from their normal working life, the program will gradually become busier.

“We had a very good lecture on Silicon Valley infrastructure, affordable funding, and best practices,” he told us. “This information was really helpful. We set some goals that we want to achieve during the trip. The first of these concerns fundraising. We aim to present the company to as many investors as possible.”

The founder of Agrolabs also spoke about the importance of ‘500 Georgia’ and the provision of vital resources to companies at their development level. He noted that the mentoring and lectures provided by the program are the most important component, on the one hand helping to establish a business with the potential for expansion, and on the other hand, to avoid costly mistakes. 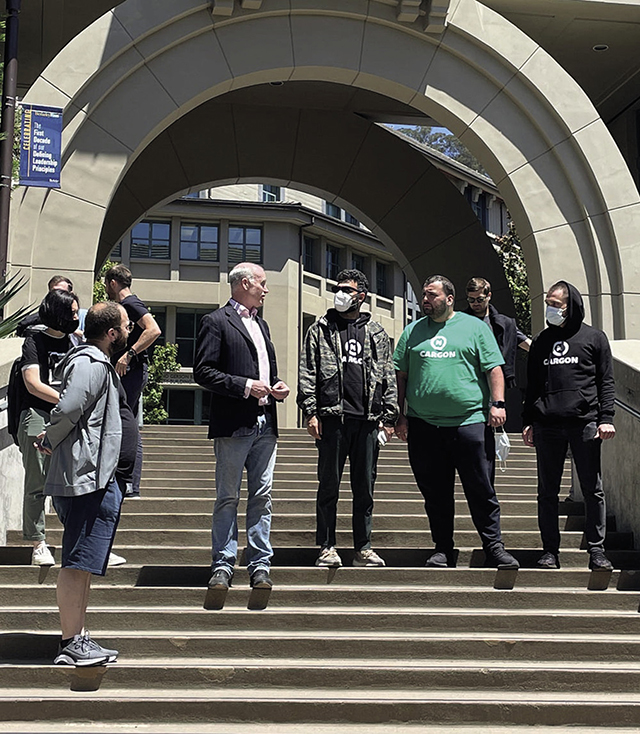 “500 Georgia, with the support of the Bank of Georgia, helps you to obtain the necessary financing and present your business to investors. We are now in Silicon Valley to present ourselves to American investors and show off companies based in Eastern Europe which have great potential for expansion in the US. We hope we are one such company,” Lazarenko said.

The next day, the winning Georgian startups visited UC Berkeley University, where they met one of California’s leading lecturers, Gregory La Blanc, who shared tips with the entrepreneurs on product digital transformation, and talked about attracting talent and Silicon Valley prospects.

The 500 Startup Project was launched in June last year at the initiative of GITA, with the support of the Bank of Georgia Group and the facilitation of 500 Startups. As Andro Ratiani, Head of Innovation at Bank of Georgia, notes, at the beginning of the program, the total cost of all 30 companies was about $25 million. Today, that number has risen to $55 million.

Currently, the project is in the final stage, where 2 startups from 2 streams have been selected and these four teams are in San Francisco for a few weeks to undergo an intensive acceleration phase. The culmination will be the “Demo” day, on which the startups will meet more than 50 investors of Silicon Valley, present their products, and try to attract “venture” companies to invest.

“Programs such as the 500 Startups Acceleration Program offer all entrepreneurs and startups in Georgia the chance to go to San Francisco and attract Silicon Valley investors to grow their businesses,” Ratiani said.