Warehouses and distribution centers are already blanketed in security cameras, but unless someone is actively monitoring them, a lot of the footage goes unexamined. Voxel wants to change that by inviting its on-premises pixel-peeping machine-vision robots to take a closer look, notifying managers when something isn’t up to snuff. The company just raised a $3 million seed round to continue building its tech and rolling out beyond its first set of beta customers.

MTech Capital — a VC fund focusing on insurance tech — led the funding round, and its insurance focus suggests the direction Voxel has been moving with its technology. The main push is toward reducing workers’ comp and general liability insurance claims.

“We are connecting to existing security cameras, and we have a computer that sits on-site. It runs our algorithms looking for things that can lead to injury or high-risk situations for companies. We’ll detect issues that are precursors to accidents — anything from protective equipment such as hard hats, safety vests, or safety harnesses when someone’s elevated,” explains Alex Senemar, CEO of Voxel. In addition to personal safety equipment, the company’s tech can detect issues with powered vehicles, like trucks, forklifts and carts. “We’re looking at powered vehicle safety — are people speeding, not stopping at intersections, or other types of unsafe behaviors. We’re also looking at ergonomics risk, which is like a pretty large driver of injuries in the workplace. Anything from lifting, poor lifting form, overreaching. We also detect spills, to prevent slip-and-fall accidents, blocked aisles and vehicles that are parked where they shouldn’t be.” 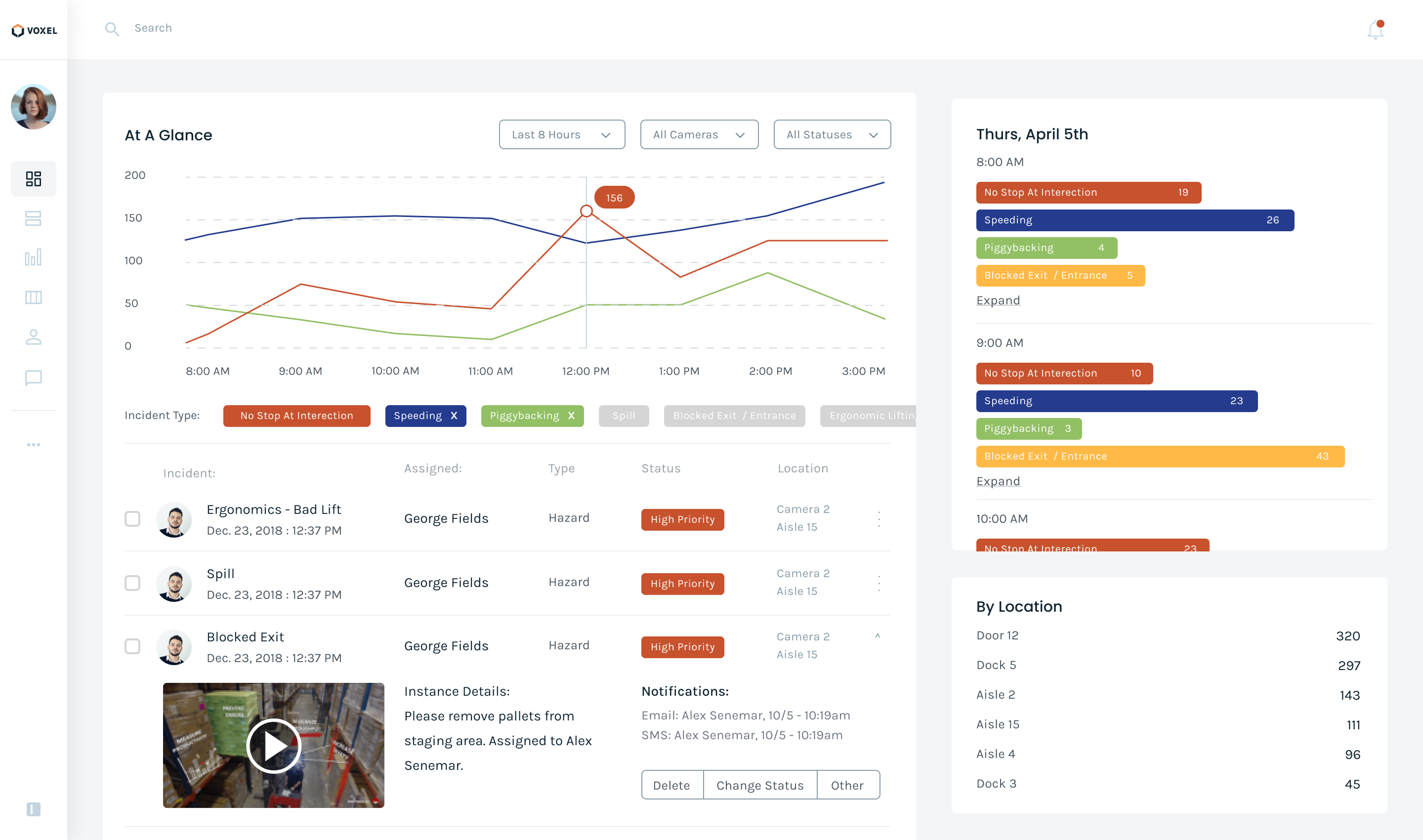 Screenshot of the Voxel dashboard.

The company was founded a year ago, and quickly scaled to a staff of 11. The company’s longer-term vision is to become a “Risk OS” for site management. The team suggests that it is particularly focused on behavioral change and site culture, rather than a more punitive approach.

To date, Voxel has had four beta customers, two of whom converted into paying customers.

“We have some great initial customers and we started seeing some incredible results, with the impact of the six-month trial periods. The customers started converting, and our goal right now is to get our business to a scaleable place,” says Senemar. “At our first site, they were having an injury per month. During the six months of our trial, they had zero. It’s too early to say that that’s statistically significant, and we need a lot more of these studies to start showing the value of preventative monitoring, but we are off to an extremely promising start.”

The company runs a hybrid architecture, where all the initial analysis and computer vision is done by adding an on-premises computer. If a safety event is detected, that is uploaded and made accessible on the SaaS online dashboard.

“We believe Voxel’s technology is a gamechanger in the category of workplace safety, both in monitoring and risk prevention,” said Brian McLoughlin, co-founder and partner at MTech Capital. “We have seen countless workplace safety solutions using wearables and other IoT sensors, but Voxel is the first solution that can drive down insurance costs and improve safety using a company’s existing security camera infrastructure. The customer can see a 360-degree view of the worksite with the ability to spot dangerous conditions and intervene in real time.”

I suggested to the founder that building a company around a highly litigious market like the U.S. could limit the international expansion possibilities for Voxel in the long run, but the CEO of the company disagreed. “As things get more litigious, the cost of these things are significantly more. Injuries are pretty expensive in general, but I think there’s definitely countries where the value prop is much more clear,” says Senemar, suggesting that countries in Western Europe spend a lot of money in this space too, but more for regulatory reasons rather than due to litigation risk. “Safety monitoring can often be a reactive and manual process, and it can be difficult to identify the root cause of injuries. In 2019 alone, U.S. employers spent $171 billion on more than 5 million injuries. Our technology gives them a way to prevent these injuries on a scale that would be nearly impossible to do without it.”

The co-founding team consists of CTO Anurag Kanungo, who co-founded Sherbit with Senemar, and worked at Uber’s Self Driving Unit; Harishma Dayanidhi, who developed self-driving car technology at Uber and Aurora; and Troy Carlson, a former Google software engineer.

UPDATE: On Voxel’s request, TechCrunch removed a reference to the company’s pricing model that appeared in a previous version of this article. We also added the names of the founding team beyond the CEO’s, as these were accidentally omitted at publishing