For years grocery retailers have been using data driven forecasting to help them predict demand to figure out which products to reorder to keep shelves stocked. That’s nothing new. But Berlin-based startup Freshflow is targeting a particular slice of this market: It’s built an AI-powered forecasting platform to help retailers optimize stock replenishment of fresh, perishable goods — such as fruit and vegetables, meat, dairy and bakery products — in order that food waste is minimized and retailer revenue maximized.

It says its first customer has seen a 28% reduction in food waste and a 16% increase in revenue after around eight months using its AI-powered system to automate fresh produce restocking — with average rates across the (handful of) early adopters standing at 30% less food waste and a 16.7% revenue boost.

A quirk of grocery retailing is that fresh produce reordering is often still done manually, says Freshflow co-founder Avik Mukhija, with supermarket staff taking what often amount to “gut instinct” decisions on how much fresh produce to reorder — which can lead to over-ordering that not only hits revenue but leads to food waste as unsold items spoil quickly and have to be thrown away; and also under-ordering — meaning retailers are losing out on extra revenue if shoppers are frustrated by empty shelves.

The reasons manual reordering has persisted for this (fresh) segment of grocery retail are myriad, according to Mukhija — including short (but non-uniform) shelf lives; quality variation; seasonality; and products often being sold by weight rather than piece, which complicates ERP inventory data. “Those challenges combined make fresh products inherently different to packaged,” he argues, saying it’s been almost a “retail mantra that a human being could still manually do this better than a system could.”

“And because that is the opinion … until now, for the most part, retailers have just relied upon people to do this part.”

Freshflow’s premise is that machine learning can do a far better, less wasteful job at restocking fresh food than the human eye, nose and gut by being able to weight a variety of factors that may affect demand (such as weather, season, local events) and by crunching available retailer data to do probabilistic modelling and predictions (such as to forecast the shelf life of different produce) to — overall — more accurately match supply and demand.

Mukhija says its early results (albeit for a small number of customers) stand that up. “Our prediction is definitely better than what has been done historically using gut feeling because we have reduced the waste and seen a significant revenue increase.”

“When you look at the graphs between what we predict in terms of sales and what actually happens it almost tracks it perfectly,” adds co-founder Carmine Paolino — who, when asked about the model’s accuracy, tells us the “mean absolute error” for its predictions so far is <1.

Assuming Freshflow’s AI can maintain this early performance as it scales to serve more retailers, the startup looks to be onto something big and important: As it notes, the grocery retail sector is responsible for some 5% of the total amount of food thrown away annually, equating to more than 4.5 million tonnes. While, in Europe, over-ordering caused by poor demand prediction contributes to $50 billion of fresh food being thrown away by retailers each year. 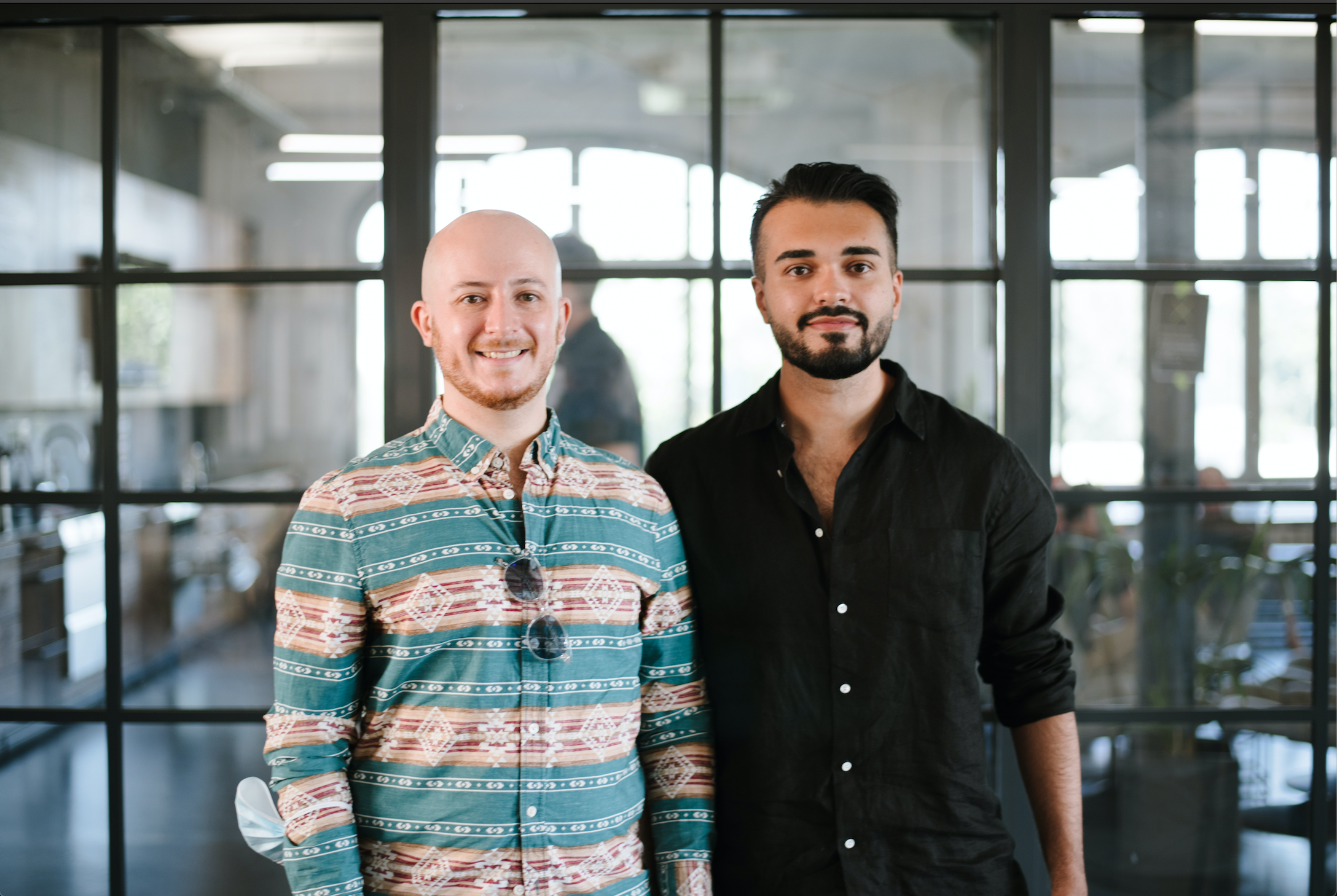 The Berlin-based startup, which was founded just over a year ago, isn’t alone in spotting the opportunity to apply machine learning techniques such as probabilistic modelling to fresh food ordering. It’s competing with a number of U.S. startups like Afresh and Shelf Engine. While in Europe, the competitive field looks a bit thinner but there are more generalist retail demand planning platforms like Relex — as well as, of course, the German ERP giant SAP — but Freshflow argues that its dedicated focus on fresh produce gives it an edge for fresh groceries versus less specialist demand forecasters.

Beyond that, another differentiating factor it claims is around ease of integration for retailers. Freshflow’s platform is designed to sit as a layer on top of retailers’ existing ERP systems — and Mukhija says customers can be up and running with the platform in about a month.

“One of the key properties of Freshflow is that integration is super lightweight,” he tells TechCrunch. “Usually when supermarkets are onboarding new IT systems it’s several months or several years of integration time that needs to happen. Because they have very outdated ERP systems and there’s no proper IO/APIs that they have.

“With Freshflow we are able to onboard them within one month — and the reason is we are a lightweight layer on top of their existing ERP system so there’s no need to integrate specifically. We work off of data pipelines that deliver us data out of their system.”

On the store floor, the product takes the form of an iPad app that is used by the produce team — informing them of the recommended restocking levels per product. This reordering process is intended to be largely automated by Freshflow’s app but the human staff can step in and override the AI’s recommendation for a particular product order if required.

Freshflow says its system is live with one of Germany’s largest grocery retailers, as well as with an Eastern European quick commerce player. It’s not naming any customers as yet but, when pressed, tells us the SaaS is live in four stores in total.

It’s announcing a €1.7 million seed funding round today, led by German venture fund Capnamic and European climate tech VC, World Fund — with a number of strategic angel investors also participating, including Alexander Mrozek CEO at Dr. Oetker Digital and Jens Fiege and Felix Fiege, CEOs at FIEGE Logistics — and says it intends to use the new financing to expand its footprint in Europe with the goal of getting its SaaS into 100 stores.

Commenting on Freshflow’s seed raise in a statement, Tim Schumacher, general partner at World Fund, said: “Almost 40% of all food produced globally is wasted and this is causing six times the carbon impact as the entire aviation industry worldwide. That’s what makes Freshflow’s goals so admirable and was such a key reason that we at World Fund wanted to support them. Avik and Carmine have developed a very exciting state-of-the-art AI engine which is already seeing remarkable results and I have no doubt that the future is very bright for Freshflow.”

In another supporting statement, Dorothea Gotthardt, investment manager at Capnamic Ventures, added: “At Capnamic we were immediately impressed by the scale of ambition when it comes to Avik, Carmine and the team at Freshflow. Tackling the issue of food waste at the same time as boosting a retailer’s bottom line is an eye-catching proposition and given the results so far, one they are clearly delivering on. The sooner they can expand across the continent the better it will be for retailers and consumers. I can’t wait to see where Freshflow goes in the next 12 months.”

Freshflow also previously took in some pre-seed funding via the Berlin-based Entrepreneur First accelerator program where its two co-founders — who both have a background in machine learning — met and decided to join forces around the idea.

“Our AI works from a combination of data that comes from the stores — from the retailers — we have sales data, ordering data, we have shrink [produce wastage] data, we have the data about the products … sometimes also nutritional info, all kinds of information we get from them. We also get external information such as the weather data. And sometimes also location data — if there are local events and stuff. And we combine it all together in our machine learning models,” says Paolino, explaining how the AI cooks up its demand predictions.

“Also we use probabilistic inventory that basically knows what are the shelf lives on the products. Which is one of the biggest challenges in our space — especially with perishable products — because we’re able to actually model the shelf lives on the data that we get from supermarkets and this is because every single supermarket handles fresh products in a different way.”

Paolino gives the example of a store leaving a certain type of vegetable unrefrigerated (say after it arrives and before it’s shelved and/or put into cold storage) even for a relatively short period of time, which may nonetheless substantially impact the overall shelf life for that product — meaning that’s another variable the system needs to factor in.

To do that, Freshflow isn’t in the store surveillance business; rather it’s working backward from data points the supermarkets provide as part of their standard produce tracking processes — i.e., information on unsold/spoiled fresh food which, combined with data on when that produce arrived at the store, can be used to probabilistically predict shelf life.

“So we have this machine learning system that figures out by itself the self lives of products — then we have an inventory that is probabilistic and we know more or less what is in the inventory and we combine it all together in our machine learning model to essentially predict what should they order,” adds Paolino.

Freshflow expects its predictions to further improve over time, as they ingest more data by onboarding more customers — and as customers use the system and feed back more data points (including, for example, any staff decisions to override a restocking suggestion) — as its algorithms get better at understanding the longevity of perishable goods and at predicting human demand for fresh foodstuffs.

“Especially when you’re looking at brick-and-mortar retailers, their revenue in fresh products is the only product category that’s actually increasing versus online because people like to go inside the store and buy fresh stuff. And storage space is obviously remaining the same size,” adds Mukhija. “We’ve noticed that with our existing clients; those cold storage rooms go full very quickly and then things go bad very quickly too, obviously.”

The startup’s longer-term vision is to expand from serving customer-facing grocery retailers to warehousing facilities, suppliers and even, ultimately, farmers — with a goal of automating the whole fresh food supply chain and reducing global food waste by 50%. Or, well, that’s the moonshot.

Couldn’t supermarkets do this kind of predictive modelling themselves — given they already own a lot of the core data needed to train forecasting AIs in the vagaries of perishable groceries?

“Generally supermarkets do what they do best and this is how we see the future in the retail world,” replies Mukhija. “We always hear this from store managers — they want to make sure they’re attending to their customers. That the fresh produce section looks really nice and presentable and a lot of quality checking is going on on the shelves. But they don’t want to be spending time doing data analytics and building AI teams in-house. It’s extremely expensive — you’re reinventing the wheel every time. And it’s also hard to attract top notch AI talent.”

Paolino also chips in on that to say Freshflow is planning to experiment with applying reinforcement learning technology to its AI-powered predictions, emphasizing: “And that is really, really hard to do — also for retailers.”