How many people have stuck with the same auto insurance provider because the process of finding a new one feels overwhelming and painful?

It’s no surprise then that a number of startups have emerged over the years to help consumers tackle this challenge in one way or another, including The Zebra and Jerry. The latest company to gain traction in the space, and raise venture dollars, is Trellis.

Trellis says it has built an API platform that lets consumers shop for car insurance policies by offering side-by-side comparisons, a way to buy a new plan and cancel their old plan — all at once. What separates Trellis from many others in the space is that it also partners with digital banks, fintechs and financial institutions so those organizations can offer the insurance options to their customers. And now one of those financial institutions, Amex Ventures, has poured $5 million into the company in an effort to help it continue to grow.

“We are not a brand that most consumers have heard of, and we intend for it to stay that way,” said CEO and founder Daniel Demetri. By partnering with existing financial services platforms such as Acorns, Truebill and Albert, Trellis aims to help businesses that have an audience that are already engaged, and that they are having financial conversations with, help bring insurance into the conversation.

“As we think about broadening the reach of our platform, there’s a lot of cool opportunities for us to explore doing that with American Express,” he said. “Expanding our relationship with large financial institutions is our core focus.”

Before he founded Trellis in 2019, Demetri worked at banks like Citigroup and JPMorgan, as well as tech companies like Google, Kayak and Earnest.

The concept for Trellis, he said, was based on the idea that car insurance and homeowners’ insurance “are super confusing for consumers and unnecessarily disjointed from the rest of our financial lives.”

Trellis offers a suite of technologies packaged as “Savvy” that, in a nutshell, help consumers make better insurance decisions and tie those decisions into platforms they’re already using “to make it more convenient and accessible,” according to Demetri.

Part of his motivation for starting the company was the belief that insurance is overly separate from the rest of consumers’ financial lives. His intent with the startup was also to give everyday Americans access to the same sort of advice that high net worth individuals get through “high-paid” financial advisors.

“The financial services and platforms that are available to the mass market are very monoline — it’s ‘here’s your bank account, and then here’s your credit card, and then here’s your auto loan, and then your car insurance is over there,’” Demetri told TechCrunch. “All these things are like different planets and so the only thing tying it all together is the consumer themselves and a lot of work.”

As a result, he said, consumers might not be as attentive to the decisions they’re making. That’s where Trellis comes in.

For example, the startup has a set of proprietary digital recommendation technologies that gives consumers a way to compare their existing insurance policies to potential new ones. This means that they are comparing apples to apples, rather than apples to oranges. Some sites offer quotes on new policies, he said, but without taking into account the consumer’s existing coverage so they don’t know if they’re paying less for the same, worse or better coverage. Frustrated consumers often don’t end up switching policies because it can be too much work to manually compare one policy to another.

In summary, Demetri describes Trellis as the “Plaid for insurance.”

“A consumer can provide the password to their insurance account, and then we go get all of that data and provide a bunch of quotes that match their coverage,” Demetri said.

The technology can go a step further, he added, in that it can even find issues with a person’s existing coverage. For example, the company often sees customers who might have $250,000 worth of coverage in case they hurt somebody, and only $5,000 if they hurt their car.”

“We can push insights because we can understand someone’s existing coverage,” Demetri said. “By understanding an existing insurance policy, we can bring simplicity in the process to the consumer.” 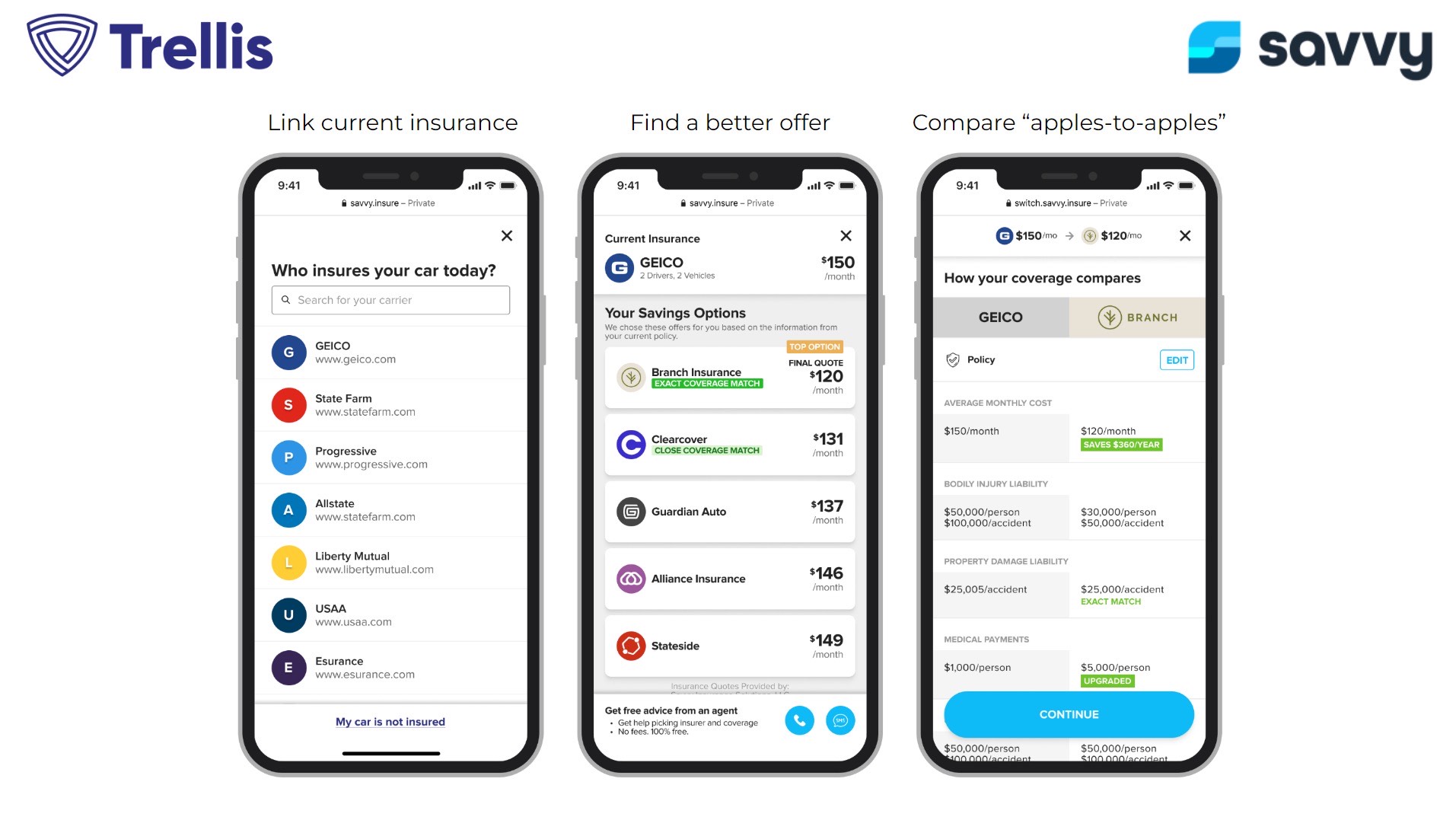 While Trellis started with a focus on auto insurance, it is working to add homeowner’s insurance to its offering. And while consumers can go to the company’s website to try it out, Trellis is more focused on white-labeling its technology and embedding it into its partners’ apps and websites. The startup has doubled its number of partnerships over the past 12 months to “a couple of dozen,” and has integrated the Savvy platform in seven of the top 50 mobile finance apps and four of the top five digital banks. In total, more than 9 million users have visited Savvy, approximately 1 million user insurance accounts have been “securely connected” and users have saved an estimated $60 million, the company claims. Trellis has quadrupled its number of users versus a year ago. Revenue growth, Demetri said, is “better than proportional” to that growth.

“More and more insurers are participating in the program,” he said. “That means more options for the consumer.”

Demetri started out building Trellis in San Francisco and moved its headquarters to Salem, New Hampshire, where he is based. The company currently has about 80 full-time employees.

Previously, Trellis raised a total of $12 million across a seed and Series A round from investors such as General Catalyst, Nyca and QED Investors. Demetri describes the latest financing as a strategic investment.

Margaret Lim, managing director at Amex Ventures, said that through the investment, American Express wants to collaborate with Trellis “on partnerships that can help our customers make better financial decisions.”

“Insurance is an essential part of our customers’ financial lives. Yet today the process is highly cumbersome and filled with many pain points,” she wrote via email. “Trellis is simplifying the entire insurance buying process, making it more seamless and transparent. It has rolled out a series of solutions that makes it easier…for consumers to compare and purchase the right insurance policy. The company’s strong user growth momentum and partnership traction demonstrates that their value proposition is resonating.”